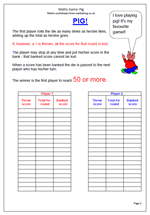 This is a maths game more suited to upper primary school children as it requires quick mental arithmetic skills. The idea is to roll the die as many times as possible adding up the score as you go alon; but there is a catch!

A scoring sheet is useful

This is a game for two or more people, although usually played in pairs. It is good practice for addition skills up to 50, especially adding three or more small numbers.

The first player rolls the die as many times as he/she likes, adding up the total as he/she goes.

If, however, a 1 is thrown, all the score for that round is lost.

The player may stop at any time and put his/her score in the bank – that banked score cannot be lost.

When a score has been banked the die is passed to the next player who has his/her turn.

The winner is the first player to reach 50 or more.

Options: raise the winning score to 100 or more.

Use a 0-9 die with two losing options.