Well it was only a short while ago when I mentioned a piece of research which suggested it was not necessary to have male teachers in primary school. Yes, you’ve guessed it, another survey (the Yougov survey) recommends more men should be teaching in our primary schools. They say that it leads to better behaved boys. END_OF_DOCUMENT_TOKEN_TO_BE_REPLACED

What is expected of children during their primary school years in England?

Let’s continue by looking at the expectations for children at the end of year 2 (6 to 7 years old). This is a year where a huge amount of new maths is introduced. However, it is still important to keep the maths in a practical context using real life situations. One of the most important developments is that children are expected to work with larger numbers, up to 100 and whole hundreds. Partitioning (or splitting numbers) is introduced with questions such as 36 = ? + 6.
Remember to look at the year 1 expectations to see the progression. END_OF_DOCUMENT_TOKEN_TO_BE_REPLACED

Maths worksheets: Count in steps of one.

Here we have some practice at filling in number lines using two digit numbers. Some of the numbers have already been written in. Notice that the number line has the lowest number at the bottom – and the numbers are completed in ascending order. It is interesting to watch how children do this; most will fill in from a number already there and prefer to count up rather than count down.
A superb practical experience is to play snakes and ladders which has all the ingredients of counting on and going back down the snakes. Large floor game boards are great! Make sure you count out loud when it is your go. Other dice board games are also excellent as counting practice.

What is expected of children during their primary school years in England?

Let’s begin by looking at what is expected by the end of the Reception year – that’s children aged between 4 and 5 years old. This is sometimes called the Foundation Stage. Yes, even our 5 year olds have targets to reach!
I will take each of the strands in turn, but as you go through them it will become clear that the most important thing of all is to talk with your children and use the vocabulary of simple maths to help them describe the world around them. END_OF_DOCUMENT_TOKEN_TO_BE_REPLACED 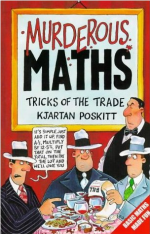 Now, how serious do you like your maths?
‘Not very much!’
OK then the Murderous Maths series might be right up your street.
I have taken my favourite of the series: The Essential Arithmetricks featuring Pongo McWhiffy amongst many others, who guide you through the complexities of arithmetic – including awful addition, sickly subtraction, terrible tables, maddening multiplication and diabolical division. Yes, they do like their alliteration. It also includes all the signs you will need to use and pages on place value, estimation and manipulating equations.
Almost mad, but in fact there are plenty of really useful tips on how to improve mental arithmetic, all set out in a fun way with amusing characters and illustrations. Your children will either love it or hate it!

free maths worksheet counting in ones

Two more maths worksheets to help with counting. Children need an awful lot of practice at counting. To begin with they will probably touch each picture as they count up. Try counting the same set of cakes, but starting from a different cake. Colour the cakes in two different colours and count how many of each colour – this helps with early addition. The more you can do the better – make collections of cuttings from magazines of animals, food, cars etc and create a scrapbook. Count the number of pictures. Nothing wrong with using fingers to count on – most people do it! 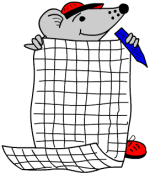 Two maths worksheets below look at the probability line from 0 to 1.

Probability brings with it a whole new set of vocabulary and concepts. By the end of year 5 children should be familiar with the following terms:

Plenty of progress is expected with data handling during Stage 4. By the end of the year children should have a good understanding of, and be able to spell, these words:

One of the most difficult concepts for them is the pictogram. This will be the first time that they come across a symbol which represents more than one item (eg. one stick person represents 10 people). Help is often needed in pointing out that the picture means ten people, not just one and that half a stick person represents 5 people. They should be able to interpret and answer simple questions about pictograms.

A couple of data handling worksheets. The first re-inforces the year 2 work on sorting numbers. The second uses a Venn diagram to sort shapes. This is the simplest kind of Venn diagram where squares are sorted as a special set of shapes. Give your children plenty of practice at sorting into different sets, using a variety of criteria, including shape, colour, size etc. Also get them to discuss the best way to show their results. Further examples of this will come later, including more on Venn diagrams and tallying.