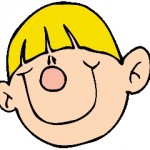 To be able to successfully help your child with maths at home it is important to have a good idea of what is expected in school. This is a list of the targets expected of children by the end of Year 1 and most teachers will be planing their work around these. Of course this does not mean that all children will achieve these targets; some will find them impossible whilst many will be able to go on further. However, they do act as good starting point.

• be able to count up to 20 objects reliably. If the objects (eg buttons on a tray) are moved around they should be able to say that the total number has not changed without recounting. (Younger children will count them again if they have been moved around.)

• be able to place numbers on a blank number line in the correct order.

• use the terms, half and quarter in a practical sense
(eg give me a quarter of the orange).

• be beginning to count on and back in twos, fives and tens.

• know that addition can be done in any order.

• use informal written notes to help with addition
(eg jotting down the answer to adding 2 numbers before trying to add the third).

• understand that subtraction can mean ‘take away’.

• understand that subtraction can mean ‘find the difference between’.

• use informal written notes to help with subtraction
(eg jotting down 5 circles and crossing out 3 for 5 – 3).

• understand and use the vocabulary related to addition and subtraction, including: more, add, sum, total, altogether, equals, =, take away, subtract, difference between, how much more/less, how many are left?

• be able to combine groups of 2, 5 and 10 in a practical situation
(eg combining marbles into groups of 5 marbles).

• be able to share a group of objects into 2 equal parts
(eg sweets shared equally).

• be able to visualise and name common 2-D shapes, including circle, triangle, rectangle and square. This includes activities such as “Find a shape which has 3 corners and 3 sides”.

• be able to visualise and name common 3-D shapes, including, cube, cuboid, sphere, cone and cylinder. This includes activities such as describing the properties of a shape by the feel of it, before seeing it.

• be able to make patterns and pictures with 2-D shapes and make models with 3-D shapes such as Lego.

• begin to describe the position of shapes, using terms such as: over, under, underneath, above, below, outside, inside, in front, behind, beside, before, after, next to, opposite, between, middle, centre, edge, corner, top, bottom, side. This is where activities such as moving furniture around a toy house are very important or placing counters on a board game.

• be using everyday language to describe direction, such as: left, right, up, down, forwards, backwards, sideways, across, along, through, to, from, towards, away from.

• begin to be able to describe movements in a straight line and turning. At first turning will only be by whole and half turns but it is important to recognise shapes that turn about a point, such as a pair of scissors.

• Once again it must be emphasised that most of this work is done orally with practical equipment. Toys, board games, may seem like playing to us but are invaluable learning experiences.

• be able to make direct comparisons between two items eg comparing the length of two pencils, the weight of two parcels, the capacity of two cups. A set of balance scales is very useful for this kind of work.

• begin to use non-standard measures
(eg the jug holds 6 cups of water, the table is about 7 rulers long).

• be making sensible estimates and guesses related to length, mass and capacity. Standard units such as cm, km, kg are not used at this stage.

• describe and solve simple puzzles or problems
(eg How many ways can you score 4 rolling two dice?).

• describe ways of solving a puzzle or problem orally
(eg talk about or draw what coins could be used to make 6p). 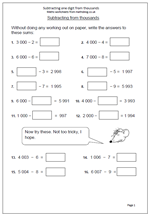 Sometimes it is much easier to carry out a calculation mentally (in your head) than to use the standard written method. This page of questions illustrates this perfectly. It looks at taking a one-digit number away from a multiple of a thousand.

if this was written down on paper it would involve considerable amounts of crossing out and ‘borrowing’ from thousands to hundreds and then from hundreds to tens; a potential minefield for children. However, if they just count back from the whole thousands, even using fingers to check that they have counted back the correct number, hey presto, the answer is found in seconds.

This page can be found in our Year 4 Calculating category.

Subtract a single digit from thousands

It is important that children become familiar with calculators as they will be using them more and more as they progress through High School. There are many skills to learn and in this activity it is certainly a great help to be able to work out mentally division calculations. as the calculator will only confirm or otherwise your calculation.

This is the final game in our calculator series looking at tables and multiples. Once again the idea of the game is to get four counters in a row, this time on a multiples of 9 grid. Recognising multiples of 9 is relatively easy as the digits always add up to 9 or a multiple of 9. But knowing exactly which multiple is needed is much harder. Why not challenge your children?!! 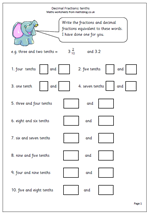 Some children do not realise that a fraction such as 2/10 can also be written as a decimal i.e. 0.2. In one sentence we have two of the major sticking points in maths, but here we have a maths worksheet which neatly combines the two, showing the equivalence between fractions and decimal fractions.

One way to show this is to use the fraction as a division sum. 2/10 can be seen as 2 divided by 10. Do this on a calculator to get 0.2. Also remember, to divide by ten mentally, just move each digit one place to the right, putting in the decimal point if moving from units to tenths. This page can be found in our year 4 resources. 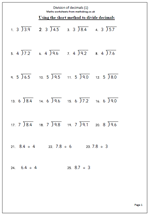 This week I would like to look at a page of practice on using the short method of division of decimals. The numbers being divided are just units and tenths which helps with getting the method correct.

There are arguments for and against putting the decimal point in before you start, or leaving it until you have reached that point in the question. it does not matter as long as it is inserted correctly.

One of the best ways to be fluent with this method is to talk it through out loud. If we look at question 2 which is 4.5 divided by 3, the verbal stages are:

c. Place the 1 on the answer line, immediately above the 3.

d. Place the decimal point just above the answer line so it can be clearly seen.

e. The remainder 1 is placed just in front of the 5 (usually written smaller).

h. Place the 5 on the answer line, immediately above the 5 (tenths).

This page can be found in our Four Rules, Division category. 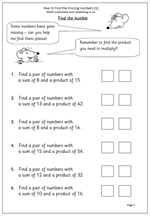 What looks like a very simple worksheet is actually rather tricky. There are six statements about pairs of numbers, along the lines of:

It is then a matter of some ‘trial and error’ work, finding two numbers which meet one of the criteria and then seeing if they meet the other. For those who are good at times tables it is more efficient to start with finding products, as there are less possible answers.

A lot is expected of children in Year 2, especially what they should know off by heart when calculating. By the end of the year they should:

•    understand that halving is the inverse of doubling and hence derive halving facts from their knowledge of   doubling.   (eg if double 8 is 16, then half 16 is 8.)

Now, that is quite a lot to know with instant recall, and they will need plenty of practice to achieve this. Why not go to our Year 2 Knowing and Using Number facts to help them on their way? 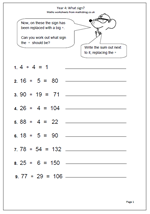 Children in Year 4 will be investigating a whole range of problems involving number and being able to recognise and explain patterns. Children should then be able to extend the ideas presented and use these to make predictions and ask ‘What if….?’ questions.

Problems may appear in many forms such as the following:

Find numbers that satisfy a particular relationship such as totalling a given number.

Adding operations of addition, subtraction, multiplication and division to a given set of numbers to make a given answer.

This page looks at finding missing signs. The calculations probably don’t need to be worked out, especially if the child has a ‘feel’ for numbers.

A good extension of this is to have three or four number cards and signs and see what whole number answers can be made.

One of the keys to success with maths is being able to calculate mentally. There should be no need to resort to written methods or to a calculator to add two 2-digit numbers; mental calculations should rule!

Having said that, these are not easy, and a number of skills need to have been learned to do these in an efficient manner.

There a a number of ways to do this. Perhaps the most efficient is to add 40 to 67 to make 107 and then add on the extra 6 to make 113.
The second part of the sheet is a reminder of some of the ways that addition questions can be phrased.