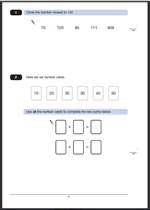 This is the first in a new series looking at SAT papers, the questions, answers and best methods of going about them. This term I am looking at the 2011 Paper B. Calculators are allowed for this paper, but generally I think that paper B tends to be harder than Paper A.

The first question has 5 numbers and asks which is the nearest to 100.

1.   The number 111 should be circled.
One mark for this question.
Other clear indications of the answer, such as underlining or ticking will also gain the mark.
Suggested method:
This is probably best done by a process of elimination.

One mark for this question.
Calculations may be given in either order.

The first two numbers within each calculation may be given in either order.
Suggested method:
A quick glance at the numbers on the cards will suggest that the answer cards are likely to have the two highest numbers in them. That’s 40 and 50.
50 can be made from 30 and 20. This leaves 30 and 10 to make 40.

A calculator is not really of any help with these two questions.

Question 1 and 2 answers and suggested method 2011 Paper B 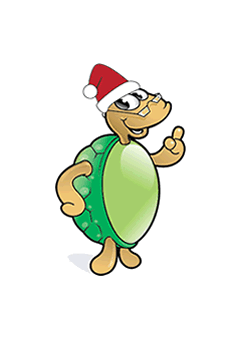 Here at the MathsBlog we think URBrainy.com is a great site for some really impressive resources.

This Christmas they are running a very special offer. If you subscribe during December for a yearly package you will get 18 months access instead of 12! That’s a whole 6 months extra free on their already discounted yearly rate.

Register for a URBrainy.com Trial 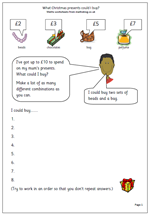 Here we have an open-ended page to keep up the Christmas theme for this week.

More Christmas themed worksheets can be found at;

The task is to find as many different combinations of presents that can be bought for up to £10. The key here is that the whole £10 does not have to be spent.

So 3 sets of beads and a box of chocolates is one possibility, costing £9 in total.

As usual, look for well a well organised logical approach.

This page can be found in the year 4 Using and Applying maths category.

More Christmas themed worksheets can be found at; 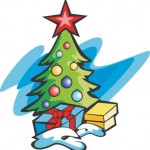 Looking at my stats I can see that everyone is very busy with Christmas assemblies, shows, shopping, eating, drinking etc so I will shortly be joining you all and have a few days off. I will leave you with a little puzzle in case you have nothing better to do!

Put the numbers 1, 2, 3, 4, 5 in the bottom layer of baubles on the Christmas tree. The next layer is made by adding the pairs of numbers below and so on up to the top.

The numbers on the bottom row can be put in any order – what order will give the highest possible total at the top?

Answer is given for those who have eaten too many mince pies. 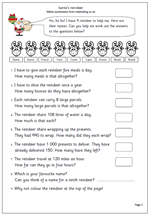 We continue with our seasonal worksheets with some reindeer questions, probably best suited to children in Year 4 upwards.

Everyone knows about Rudolf, the red-nosed reindeer, but far fewer people know that there are eight others to go with him!

Santa’s reindeer pull the sleigh for Santa and help him deliver the presents. The nine names are based on a poem written in 1823 called, ‘A visit from St. Nicholas’, by Clement Moore which named eight reindeer:

in a little known verse:

‘More rapid than eagles his coursers they came,
And he whistled, and shouted, and call’d them by name:
“Now, Dasher! Now, Dancer! Now, Prancer, and Vixen!
“On, Comet! On, Cupid! On, Donder and Blitzen!’

The popularity of the song, ‘Rudolf the Red Nosed Reindeer led to Rudolf being added to this list, making nine in total!

This page can be found in the year 4 Using and Applying Maths category.

More Christmas worksheets are available at: 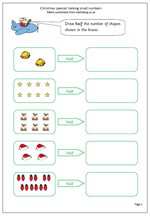 From time to time it’s nice to have a topical maths worksheet and here is one for year 1 at Christmas time.

The ability to double and halve numbers quickly is a great strategy to have at your fingertips as it can help later with all sorts of calculations. Here we have a year 1 page which looks at halving small even numbers. The theme is Christmas and there is lot’s of drawing! You might like to give a separate piece of paper so that the drawings can be done larger than on the sheet; or it could be very useful as a whiteboard activity.

Whilst I do not have a great many Christmas pages or a separate category for this I do know that urbrainy have an increasing number of them for the whole primary age range. A small selection are available absolutely free at: 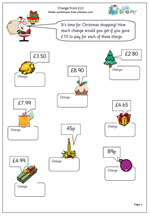 Primary school pupils could face a ban on using calculators according to Nick Gibb, the Schools Minister. Following a government study he has suggested that pupils should only be able to use calculators once they have mastered basic maths, including learning ‘times tables’.

This announcement comes as a result of a government study which found that 24% of adults had the number skills of a child aged 9 or younger. This includes being unable to work out their change in a supermarket.

That certainly does not surprise me, but I am not sure of the evidence suggesting a link between calculator use and lack of basic skills. Certainly I know of no school which allows children to freely use calculators to carry out basic calculations. I am also wondering how these children deprived of a calculator are going to get on with the SAT Paper B which is based on using a calculator and usually much harder than the non-calculator paper.

This kind of knee jerk reaction is typical of our government ministers. They might be better served by suggesting what children should be doing to improve their basic skills. Rather coincidently, talking of change from a supermarket, urbrainy.com have just informed me that they have  a Christmas Special  ‘Change from £10’ worksheet amongst many which are now available free of  charge on their site. These are also available for you at:

Over a period of time I have collected together a great selection of books suitable for young children to help them with counting and number skills. All these books are a great read in themselves, but they also all have a mathematical slant. They are rather hidden away within the Top Maths Books section and you will need to scroll down past the other maths books to find them, but if you have young children I thoroughly recommend having a look.

The Boy who was Followed Home by Margaret Mahy all about a young boy being followed by a hippopotamus.

Handa’s Surprise set in Africa and full of exotic fruits and animals.

The Very Hungry Caterpillar, by Eric Carle, an absolute must for all young children.

Mr Wolf’s Week by Colin Hawkins is an old favourite, with an almost friendly wolf.

Not forgetting one of all time favourites, Ten, Nine, Eight by Molly Bang, each page has a warm comforting glow, perfect for a bedtime story.

These are just a few of the great reading books suggested and they can all be found at;