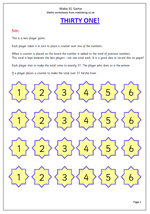 This is a great game for two players to help with mental addition of small numbers. Each player takes it in turn to place a counter over one of the numbers. When a counter is paced on the board the number is added to a joint total. It is a good idea to write the totals down as you go along, or there might be a dispute!

Each player tries to make the total come to exactly 31. The player who does so is the winner.

If a player places a counter to make the total over 31 he/she loses.

This is a game of strategy and there are times when the total can not be reached (perhaps if all the ones have been covered). 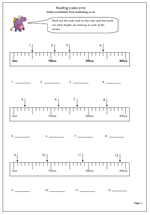 We have an increasing number of maths worksheets covering measuring for Year 3. Reading scales where the divisions are not all labelled is an important aspect of this and we have a tricky page on reading length.

For those who think that miles should still be taught we have a couple of pages of working out distances using miles.

For those who prefer metric we include three worksheets on measuring in kilometres as well as choosing the most sensible units of measurement.

We also have a couple of estimating and finding lengths of time.

Go to our Year 3 measuring worksheets

by Barbara Reid
This book is a real must for any parent who loves sitting down and looking at books with their young children. Written in rhymes to tell the story of Noah’s Ark you will find your child returning again and again to their favourite pages.
One of the best aspects of the book is the amazing 3-D sculptured animals, but the book can be enjoyed in a number of ways. The rhymes can be read or sung and children can soon learn them or just look at the animals and talk about them and the tricks they get up to.
The animals come in two by two, three by three, four by four etc so it is easy to incorporate a little maths. 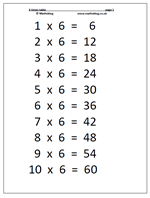 Now we come to some of the harder tables, starting with the 6 times table.
There is nothing especially ‘catchy’ to remember about this table, it is pretty much just hard work. It should not be learned until the 2, 3, 4, 5 and 10 times tables have been learned. If this has been achieved, then over half the 6 times table has already been mastered!
Someone with a good knowledge of the three times table can always double the answers to get the six! Also six sixes is thirty six has a nice rhythm to it.

Below are two worksheets for the six times table. A good way to do these is to time them to see how long your child takes.
When you get really good with a table you should be able to say it in under ten seconds (missing out unnecessary words ie one six, six; two sixes, twelve…etc). 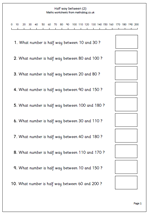 I’ve had a number of requests for another page to go with the ‘Finding half way’ sheet published earlier. This is suitable for Year 3 children. It is interesting to see how they tackle this without any help. Some will find techniques using the number line and others will find it very difficult.

Certainly use the number line to work out half way, but children also need to be shown that by adding the two numbers and then halving the answer will also give them the correct answer.

At this stage we are keeping to smaller multiples of 10 but this method applies to finding halfway between any pair of numbers. 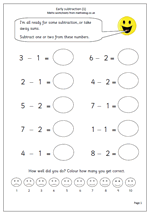 It is sometimes difficult to find subtraction worksheets that are basic enough for very young children. This page looks at subtracting one or two from 1-digit numbers. There is no number line to help, so it is very much a mental arithmetic exercise. Most children will approach it by counting back one or two, possibly using their fingers to start with.

Don’t forget to colour in the smiley (hopefully) faces at the bottom to show how many were correct. 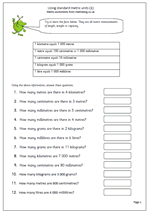 We have a growing number of Year 4 resources on measurement. Of course, children today grow up learning about metric measurements and the key standard units they need to know include:

Our measurement worksheets reflect this and include some great ideas on practical measuring using grams, kilograms etc.

We also have a couple of pages on measuring time; these look at days and months of the year.

Go to our Year 4 measuring worksheets

Seven Dizzy Dragons and Other Maths Rhymes by Sue Atkinson

‘Big books’ tend to be used only in schools as they are great for a teacher to sit with the class and look at the story. They also tend to be quite expensive and not easily available in book shops. This great book can be purchased as a ‘Big Book’ or as a paperback, but it is not easy to find.

However, I have put ‘Seven Dizzy Dragons and Other Maths Rhymes’ in my collection as it really is a great set of rhymes.
It contains 28 counting and number rhymes, including counting up in ones, twos, threes, and so on, odd and even numbers, patterns of numbers, ordinal numbers, number bonds to ten, and early addition and subtraction.

There are lots of ways to enjoy this book including learning and reciting the rhymes together and it is a great resource to help with early counting and number. 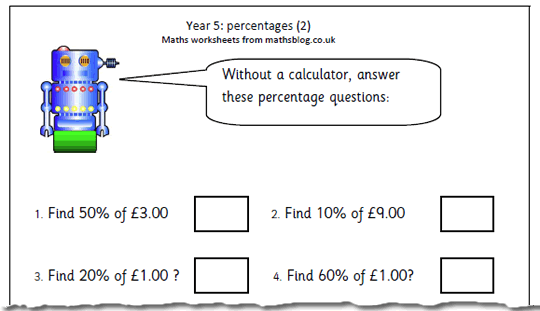 Here is the second of our percentages worksheets for Year 5. It is typical of the English that we manage to write per cent in two different ways. Unlike the Americans who use percent we use two words per cent, apart from when we write percentage when we put it altogether.

Anyway, as to the maths: remember that many percentages can be worked out ‘in your head’ by remembering that 10% of an amount is equivalent to dividing the amount by 10. At this stage we will only be dealing with whole tens so it is probably the best approach. Later more complicated percentages will be found by dividing by 100 and multiplying by the percentage. 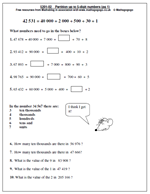 Our resource of the Week looks at place value with larger numbers, something that many children find tricky.

By year 5 children are expected to be able to read and write some seriously large numbers. A really good understanding of place value is needed to read large numbers successfully. The key to looking at a number and working out how to say it lies in separating the number up into a series of hundreds, tens and units.

Take the first set of three digits (on the right:789) as a set of hundreds tens and units: that is seven hundred and eighty nine.

Put them together to make one hundred and twenty three million our hundred and fifty six thousand and seven hundred and eighty nine.

An abacus is a really good way to look at how to read numbers and is a very powerful mathematical tool – anyone who has been to Hong Kong or China and seen how they calculate with an abacus will be amazed!

Partition up to 5-digit numbers (pg 2)