Our Counting and Understanding Number section for year 5 is growing quickly and we now have about 40 well written pages on this section. There is help with reading and writing larger numbers, including partitioning 5 digit numbers and writing numbers up to millions, which always proves tricky for children.

There are also worksheets on rounding to the nearest 1 000, ordering negative numbers, multiplying and dividing by 10 and 100, ordering decimal fractions, equivalent fractions and square numbers, as well as much more. One of the harder topics for Year 5 is percentages and we also have several pages introducing this topic.

Why not visit our Year 5 Counting and Understanding Numbers resources now? 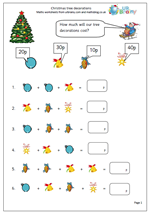 Here we have a  festive maths worksheet suitable for year 2 or 3. How much will the Christmas decorations cost? The cost of the decorations are all whole tens of pence so this is good practice at adding multiples of 10.

With the later questions, which involve adding four multiples of ten it might be a good idea to encourage making jottings of the answer as they are added up.

Thanks to urbrainy.com for allowing me to publish this page from their vast collection of worksheets and games. Well worth taking a look at this site. It can also be found in our year 2 calculating section. 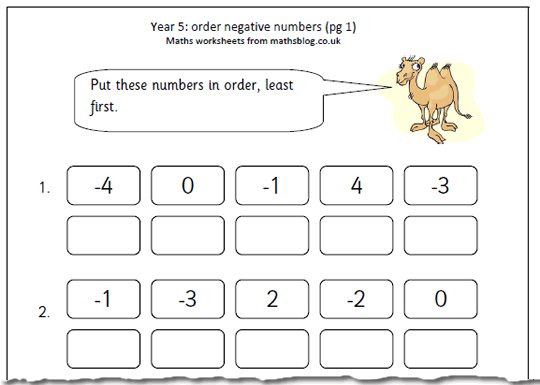 Children are most likely to come across negative numbers when using a calculator and they are usually taught about them in a practical sense in the context of measuring temperature. Number lines are also very helpful as they show that numbers continue after zero when counting down.

Here we have a maths worksheet, suitable for Year 5 children which asks for a series of five numbers, both positive and negative, to be put in order, with the least first. Calculating with negative numbers comes a little later and can cause a great deal of confusion, even in High School!

I knew that it wouldn’t be long before the present government wanted to stamp its authority on education by bringing in new reforms, and here they come!

One of the main targets is discipline and they hope that by encouraging school uniforms, house systems and prefects that a back to basics approach will improve disciple. They seem to be ignoring that a vast number of schools already have these in place!

Perhaps more importantly, heads will have the final say on expulsions, stopping independent appeals by panels which often go against the school’s wishes. However, there is a twist in that the school must find alternative education for these expelled pupils and their performance in tests will still be included in the original school’s league tables.

The White Paper also announced plans to encourage servicemen leaving the forces to re-train as teachers under a “Troops to Teachers” programme, saying that troops had a lot to offer. I imagine adults from many other walks of life have just as much to offer, if not more, but perhaps I am biased as I still remember a couple of my Grammar School teachers who were retrained after the war, and good teachers they were not!

Gove has also given himself more power over schools; through the Academies Act he can order any school to be converted to one of his academies.

There were also hints that the curriculum might be freed up from the constraints of the National Curriculum, with only core subjects being mandatory.

There is plenty more, but much of it seems to be ‘hot air’ which will make little difference to the average school. No doubt the significance of the White Paper will become clearer over the next few weeks.

In Year 2 children will be calculating using the addition, subtraction, multiplication and division symbols. Their understanding of addition will develop as they begin to add a 1-digit number to a 2-digit number as well as beginning to answer written addition questions. (This is not the same as using written methods.) Developing efficient mental methods of addition and subtraction are still the most important aspects here, as written methods, apart from jottings, should not yet be used.

There is a good selection of addition and subtraction worksheets on the site in our Year 2 calculating section as well as a growing number of multiplication and division pages. Multiplication is seen as repeated addition and the 2x, 5x and 10x tables will be learned during the year.

As well as in the Calculating section further worksheets can be found in Knowing Number Facts and our Four Rules section. 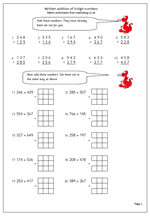 One of the things which children find quite hard to do is to set out a question in the best format. In the Key Stage 2 tests addition problems are rarely, if ever, set out in the standard form that children learn.

This page tries to help with the addition of two 3-digit numbers. The first 10 questions are set out in the standard way, but the next ten are written across the page. When faced with questions like this it is important to re-write the sum to have the best chance of success. Of course, it is important to keep the numbers in line (units under units, tens under tens etc) and squares have been provided to help with this.

A very useful page for those who are still uncertain about how to approach these questions. 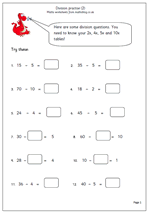 Here is a follow up page to that published earlier, giving more practice with simple division. If children have a good knowledge of the 2x, 4x, 5x and 10x tables they should find these quite straightforward. The only potentially tricky ones are where the missing number is in the middle of the number sentence 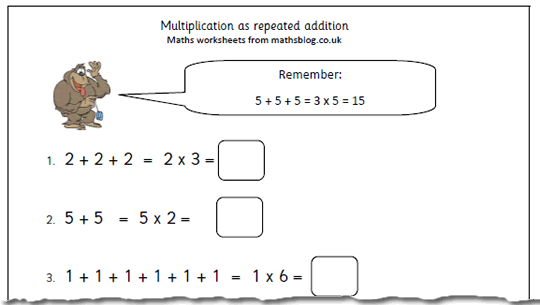 Children need to be quite confident in counting up in twos, fives and tens before going onto multiplication of these numbers.
This set of worksheets looks more closely at multiplication as repeated addition, but it would be a really good idea to set out some practical examples of repeated addition, using counters, sweets, lego etc, grouping them into twos or fives and counting each set.

Thanks to urbrainy.com for this page; it’s a great place to visit for early years maths and there is plenty for you to try free. 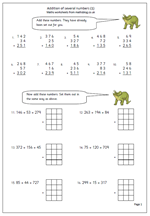 By the end of year 5 children should be confident with written methods of addition. This worksheet is a stage in this process. Some of the questions are set out how they should be. The later questions need to be set out in the same way. It is important to make sure that units are lined up with units, tens with tens etc and squared paper can be a help with this.

Remind children that when adding three digits that they can be added in any order: look for pairs that make 10 or other combinations that they recognise instantly.

Katharine Birbalsingh has certainly caused a stir in Education circles with her views on what is the best way to help children succeed. She states that the education system is broken, because it keeps poor children poor by making excuses for them.

She believes that certain values are important, including being responsible for yourself and not allowing children to excuse away bad behaviour. Children should be held to account for what they do, so that they can be responsible for themselves.

She sees failure as an important part of the learning process and argues that because we don’t want children to fail we keep making excuses for them. She also believes that exclusions are not helpful as it gives children yet another excuse for failure.

Children should feel responsible for their own results, not the teachers. Until we get children to feel this responsibility then schools will continue to fail. This is a very different viewpoint than that held in many schools, and a very challenging one. Where does this responsibility come from? Certainly the home for most children and it is very difficult for schools to change attitudes without the backing of the home.