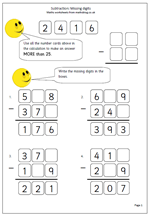 Last week I published a page of addition with missing digits. This proved very popular and I have had several requests for something similar for subtraction; so here it is.

The calculations have been laid out in the tradition, standard method of written subtraction, except that two of the digits are missing. It is not as easy as it looks to find the missing digits, especially with a question such as:

In this question the units have to be adjusted, which will have a knock on effect in the tens. This page should only be given to children who have quite a good grasp of the standard written method of subtraction, but beware, it is harder than it looks!