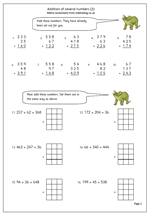 Written methods of calculating continue to prove to be some of the more popular pages on the site. This week I would like to highlight a Year 5 maths worksheet on written addition which is the second in a series showing children clearly how addition should be laid out and also giving them the opportunity to re-write questions from a horizontal lay out to a vertical layout. The hardest part of this is to ensure the numbers line up under each other, starting with the units on the far right. Squares can help with this in the early stages, but children should also get used to laying them out correctly without squared paper.

Rarely, if ever, will you find a SATs addition question which has been laid out already in the traditional, or standard method but it is expected that children use this method when solving a difficult addition calculation.