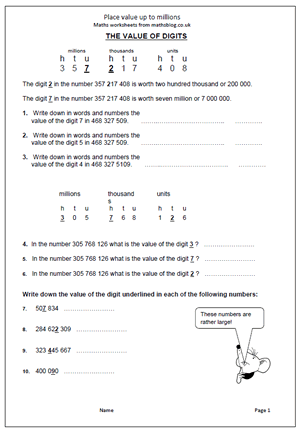 Children are expected to work with even larger numbers in Year 5, including millions. Many will have difficulties in reading and writing such large numbers and will need a lot of help to appreciate the place value of each digit.

The easiest way to read  large numbers is to think of them as blocks of three, starting on the right.

Each block of three is hundreds, tens and units, which keep repeating themselves.

The first block of three are HUNDREDS, TENS AND UNITS of ones or units.

The second block of three are HUNDREDS, TENS AND UNITS of thousands.

This page takes a closer look at reading large numbers and finding the value of various digits.

Place value up to millions