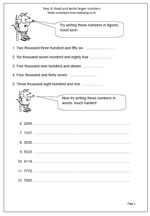 In Year 4 children are expected to be working with larger numbers, including thousands. However, it is often presumed that they can read and write these numbers without any practice. This is not the case, as many children find difficulty with this and often demonstrate the problem when asked to write down a number such as six thousand and five. They will write:

When reading numbers it is best to start working them out from the first three numbers on the right  and block the numbers into hundreds, tens and units. Then do the same with the next three, remembering that they are hundreds tens and units of thousands – these even bigger numbers will come into Year 5.

It is a good idea to separate each block of HTU in some way: a popular convention in the UK is to use a comma or a small space.